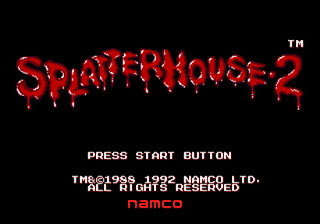 Splatterhouse 2. This is another example of the almost dead side scrolling beat em up genre. And yes, its another MegaDrive game. So sue me. (As a spooky fact: I bought this game at the same time as I bought SoR2).

The first thing anyone who wants to play Splatterhouse 2 should know is that it is a hard game. Damn hard. So damn hard, in fact, that i don't know of anyone who has managed to complete it without resorting to cheating. If you played the 2011 re-boot, then imagine the pain in the arse side scrolling levels. They were difficult, right? Well, imagine an entire game like that. Thats what this is.

To counterbalance that, however, the game looks pretty good. Whilst far from being one of the best looking SMD titles, the graphics suitably convey the dark, gory game world perfectly. The colour palette is muted, allowing the gore to stand out, and lets be honest, gore is this franchises raison d'etre. Yes, the animation isn't as smooth as most would like, but it works. Zombies shuffle convincingly. Various other hell spawn are suitably, well hell spawny.

The games audio is pretty good too. there are some scratchy but effective voice samples used sparingly, and the music is suitably horror movie-esque. This is another soundtrack that sits on my iPod.

As I said before, this is a difficult game, but it still has a replayability, as you just want to see if you can crack one more stage. The story is suitably b grade. After the events of Splatterhouse, our hero Rick returns to his life a somewhat broken man. the mysterious mask returns to haunt him, claiming that Ricks girlfriend isn't actually dead, but is being held in a 2nd, secret house deeper into the woods. Rick meets the mask once more, and begins his journey to defeat the Dark one and rescue his girl. Simple, but effective.

So, if you want a challenge, give this one a try. I guarantee you wan't complete it in 1 sitting.