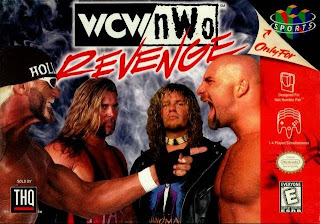 WCW/NWO Revenge was quite simply the finest WCW videogame ever licensed. Really. Infact, before THQ secured the WWF (as it was back then) license, this was the best wrestling videogame ever.

Compared to modern wrstling games, the career mode is basic in the extreme. You choose a wrestler (who can be a WCW/NWO star, or one of the developers creations, or indeed your own), and work through a ladder of matches to win the various belts on offer. No storylines, no backstage segments, just match after match.

And the matches? Well, this is still one of the most playable wrestling games ever made. The controls manage to be both simple and deep. Beginners can just pick up and play, mashing buttons and winning matches, whereas more experienced gamers can use the games diverse moveset to play a more refined game.

The game is also pretty good looking, especially for an N64 game. The wrestlers are recognizable and the arenas nice and colourful. The character animation is superb, giving the wrestlers real weigt. Compared to its at the time rival title WWF War Zone, this is miles ahead. The games audio isn't too shabby either, perfectly capturing the mood of mid to late 90s wrestling.

I poured hours into this game back when I was a poor university student, such was the replayability. And once you added in a friend for some 2 player action.... Well, you could lose entire daystrying to establish a 'champion'.

If you own an N64, you should track down a copy of this game as a matter of urgency. This is an essential title.